I'm reluctant to use the word collection, for fear that it will one day lead to more luck cats than I know what to do with, including a giant gold one...and that's not really a road I want to go down. I'm pretty happy with it. This one is my "protocol" luck cat. I'm hoping to make a few more for etsy. The ear turned out a little funny, since that was where I left a hole to turn it right side out. Next time, I'll make the ear look nicer.

filed under: arts and crafts, etsy

So Cute, it's Sick

Here's a preview of a project I'm working on: If you think that's cute, wait until you see the finished project. Believe it or not, it gets cuter.

I know this is not very modest of me, but I find myself giggling at it's cuteness from time to time. Even if no one else likes it, I'll still love it.

Since it's working out fairly well, I will start knitting to make some better felt (this "prototype" is made from sheets of cheap craft felt). I'm not really looking forward to knitting up large pieces of fabric, but it should make the final project look much nicer. Besides, I'm not even sure I know where to buy good felt. Or if I can afford to buy good felt. May as well dig into my yarn stash and make my own.

filed under: arts and crafts, work in progress

Well, I've finally managed to take some pictures and post items on my etsy shop. It remains to be seen if people will buy anything, but my fingers are crossed. I've had a few sales to friends and co-workers recently, which is awesome and will make Christmas a little better. There really isn't much money in this poor student gig.

Speaking of Etsy, as I was browsing about this evening (instead of sleeping, which I should be doing), I found the shop of the girl who was next to me at the FemFest craft fair at the Khyber. I had meant to take one of her cards and put a link here, but forgot and had no idea where to look for her shop.

In case you're wondering what the heck Etsy is, well, it's like a big online craft fair. If it's handmade, then it's probably on Etsy. Columnist Karen Von Hahn of the Globe and Mail recently did an article on Etsy and how she did her Christmas shopping there. Unfortunately, you can't read the article online. It was in last weekend's G&M Lifestyle section, in case you haven't recycled your newspapers yet. It wasn't an awesome column, but pretty cool that Etsy got the mention in a national paper. The more people checking Etsy out, the more chances that one of them will stumble onto me.

And it really is all about stumbling on Etsy. There's just so much that even a search barely narrows things down for you. Type "sock monkey" and you get 64 pages of sock monkeys and sock monkey related items. The odds that you're the one sock monkey maker that jumps off the page do not seem all that great. Of course, this is no reason not to try to sell stuff there. Who knows, it might pay off. As it is, some monkey money from the Khyber sale bought me a new dress at Winner's and a Lindt chocolate advent calendar (so much tastier than the cheap waxy chocolates you find in most advent calendars).

Anyway, bedtime and cat feeding time. This entry really doesn't have any need for pictures, but I do have to share my latest creation: monkey sized toque and scarf that I knit up on Friday at my Stitch n' Bitch (not much of a bitch, as I was the only one there - must advertise better next semester). As well, the Gerkins (not their real name) arrived home from their trek about South America and I was finally able to give Mr.G his Octopus (a free pattern from knit.1 blog - except I screwed up a step. And then added legs and a set of bagpipes): heh. the silly thing kills me everytime. If you're wondering why the octopus is playing the bagpipes, well, that's a story for another day.

I think one of the trickiest parts of making monkeys has got to be the decision over which buttons to use. The wrong button can throw off the whole monkey. I can't even think of giving them a name or a personality until the buttons are on. Before that, they really are just socks full of stuffing. An example was my dilemma tonight. I thought I was going with the white button, but figured I'd try out some others... That one was just sort of scary... the dark purple had been a strong contender (apologies for the blurry shots), but I was still leaning towards the white... That button was cute but not quite right. It'll suit another monkey much better. In the end... a whole different set of buttons!

The two white ones were not quite a match. Very close, but close is only good in horseshoes and hand grenades. It's too bad I didn't get a picture of the white ones together. Sometimes I can't tell if things like that are actually off, or if I'm just being too picky. Few would call me a perfectionist, but when I'm making the monkeys, I really spend a lot of time on the details and have trouble letting go when it might not be perfect.

I'm still not sure about the final set. I'll probably have to let the monkey stare at me for a bit until I decide if he needs different eyes.

And now off to cry into my pillow, because my favourite on ANTM - Heather - was sent home tonight. She was a far better model than the other bitches, but c'est la vie. Although I think the go-sees were a little unfair for everyone - they set them loose in Shanghai and without much help of a translator. WTF? If Bianca wins, I'm going to be pissed.

Just finished up the second of two custom sock monkeys. This little guy is made out of camoflauge socks and has the name "Lukey" embroidered on the bum. The other one has the name "Lily" on the bum. They also have embroidered eyes instead of buttons, because little monkeys have a tendency to put things in their mouth and buttons are a bit of a no-no. I'm pretty happy with them, particularly on my embroidery on the name 'Lily'. Check it out: and the "Lukey" embroidery (which I'm not as happy with because of my colour choices): Regardless, they are overall cute monkeys: Tomorrow, when I'm not finishing the final details on my proposal, I hope to get some decent photos of my other monkeys to post on etsy.

I didn't make it out to see most of the FemFest events this past weekend, but I did get to the opening of Finger of Craft by Allyson Mitchell and the Beasties exhibit. Finger of Craft was amazing! Shag carpeting in purple and red up the walls and crocheted pillows all over the place. I got to help Allyson out with some sewing last week, which was awesome. 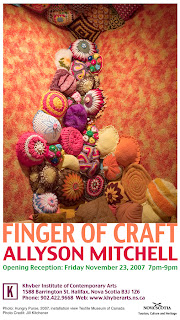 The Beastie exhibit was also really great and is going to be at the Khyber until Dec. 15. For me, the best part of Beasties was Blythe Church's "Monster's in the Closet". It was terrific. I thought it was an open coat closet and then hello! A monster peeking out! And then another from a coat pocket! She does awesome things with felt, but for me, the monsters take the cake. They are the kind of awesome that I wish my monkeys could be.

filed under: arts and crafts, khyber

Monkeys at the Khyber

Craft Fair at the Khyber today. It wasn't the big Christmas craft fair, but a part of FemFest. Business was slow and my sales were all friends. ah well. A sale is a sale. There was some other awesome stuff there and I wish I had pictures and links for them, but I sort of sucked at that. I think I was too cold to think of it. No idea what was up, but the bar area of the Khyber was frakking cold! We were all in there with coats and hats on.

But the Monkeys had a good time. There is supposed to be another craft fair at the Khyber in two weeks or something. I'm not sure how to get involved with it. It's the same weekend as the birthday party for le husband, so the timing may not work out anyway. Regardless, I'm going to get my Etsy account back up and put the monkeys for sale online.

If I had a blog, this would be a really big day for me.

Ok, not really. It was just Friday, filled with being late for work, bad carrots, teaching someone to purl, sadistic yoga, an art show opening (featuring stuff that I helped on!), then home to finish monkeys and watch some Friday Night Lights.

Actually, that is quite a day.

Anyway, this is not a blog about what I did with my day. This is the blog to fill in while I figure out how to make a website/get wordpress to work. The main goal is to shill my wares, mainly my monkeys. But if I'm going to have a blog and someone is going to read it, I may as well talk about my other hobbies, which is mostly more crafts and watching TV - hobbies you can do at the same time. I don't just watch TV though, I study it and I'm writing a thesis on Veronica Mars. 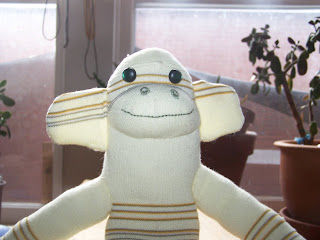 Well, it's getting ridiculously late and I need sleep. Have to get my energy back for some marathon monkey making - craft fair on Sunday at noon! (at the Khyber) And there are still a pile of monkeys to be finished. 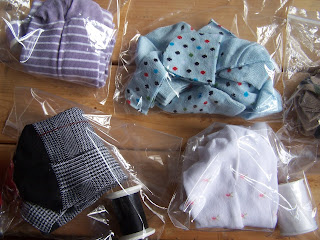 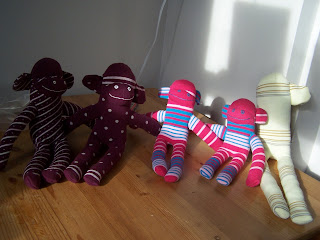