Something I've been working on recently: (It's crappy photo quality because I used my camera phone)

That's the first one. There are some things I plan on changing to the design, but I'm happy with it. The yellow part is from a sheet of cheap craft felt. The buttons were needle felted on. Then I did some embroidery as I am not skilled enough with the felting to put the numbers on that way. The speaker bit at the bottom started out as felting, but that didn't work so I switched to french knots.

One of my favourite crafty people sent me this video. The outfits hurt my brain, but I still love it.

Um, how excited am I about this screening at AFF: 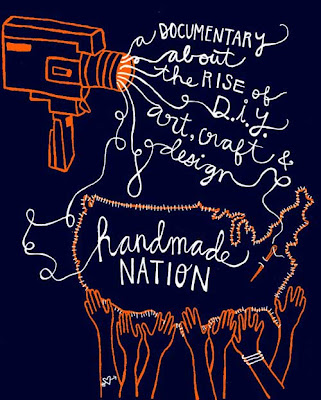 That's right. Handmade Nation at Park Lane on Sept. 24. I am so there. With crafts in hand. Maybe even my Sublime Stitching Handmade Nation pattern. Love, Me has plans to make it extra DIY special.

And speaking of craftiness and DIY: deadline for applications to the Crafters' December market are due on Friday. Email halifaxcrafters @ gmail.com with 'application request' in the Subject to get an application. It's December 5 & 6 at the Olympic Community Centre, which I predict will not only be huge, but awesome.

Now, I need to get to bed. It's late and I've got The Other Blog to attend to first thing in the a.m. and a boring book to finish before it becomes overdue at the library.

filed under: arts and crafts, craft fair, craft in film

A few pictures from my table at the Crafters' Art Harvest. Man oh man. Do I ever suck at taking pictures of my work. I was hoping to use some for my application to the December market, but that's unlikely to happen. It was a long weekend, but a good one. I'm really looking forward to the next one. Hopefully this time I'll get started on preparation more than a week ahead of time.

On another note, if you've ever "adopted" one of my monkeys, I'd love to hear about where they are now. Like this much loved monkey living in PEI: You might notice that the eyes look a little weird. Here's a closeup:

That was an emergency eye surgery. The monkey originally had button eyes when sent up to my friends before their baby was born. When I saw the monkey over Labour Day weekend, the monkey was sans eyes and I was worried that stuffing would come out at some point (had holes where the buttons were). So those eyes were embroidered on...since they were covering holes, the embroidered eyes aren't exactly as neat as I'd like. I don't think they wee one who loves the monkey cares. She was just as happy when it didn't have eyes.

This is why I'm not good at delegating

The husband meant well and I appreciated the effort (it was late, he hates messy things like glue), but this is what happened to some of the tags for the sale: 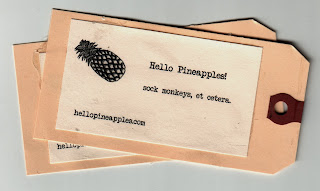 glued together. oops. I'd be better off if I didn't leave it until the night before.

Hey there Crafters' visitors (and readers who've pretty much given up on this blog)! It's Crafters' time again! 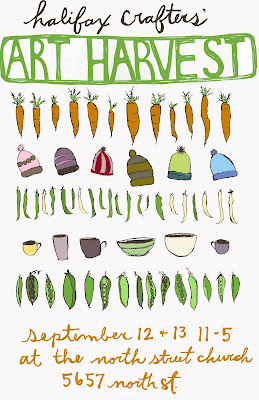 I was really scrambling to be ready this time - houseguests, head colds and road trips meant I didn't get much done during the week. I think it all came together though. Not as many monkeys as I'd like, but there it is. (although, I took pictures of my table this time! I always forget my camera).

One of the things I really love about the Crafters' shows is getting to meet other crafters. Since I usually share a table with someone, it's a great chance to get a good look their work and talk to them about what they do. During the spring show, I got to meet Robyn of Shibang Designs. Her bags are fantastic.

Today I got to meet Colleen MacIsaac of Little Foible, whose cards I've long admired at Love, Me. It was really awesome to get to watch her paint and sketch while we were at the table. She has a One Minute Film that will be screened at this year's Atlantic Film Fest.

Seriously, the North Street Church is just chock-a-block full of awesome when the Crafters are there.

If you were thinking of buying a monkey, but not this weekend, you can always check out Love, Me Boutique on Birmingham St. They usually have a couple in stock. If you're thinking that you could probably just make one on your own with an old pair of socks, well, you totally can. I can also teach you. Watch the Love, Me events page for a schedule of crafty workshops this fall.

You can also contact me by email: crafty [at] hellopineapples [dot] com. If you're from out of town, we can arrange something via Etsy.

In the meantime, I will continue to be a horrible craft blogger, as I've gotten stupidly busy with the Other Blog (Fashionable People, Questionable Things) and I'll be writing for You Know You Love Fashion (which launches on Monday!) during season three of Gossip Girl. YKYLF is all about the fashion on Gossip Girl (the good, the bad, and the downright ugly - I'm looking at you Vanessa).

Now, I need to eat my dinner before my cat steals it. Hope to see you at the North Street Church tomorrow!