To Boldly Go Where No Monkey Has Gone Before...

While visiting Palm Springs recently, my mom & I went to see Star Trek. Which was awesome! For both the classic Star Trek fan (mom) & non-fan (me - I havent' seen a full episode of any generation of Star Trek). I mention going to see the movie because of this guy: 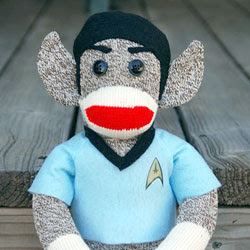 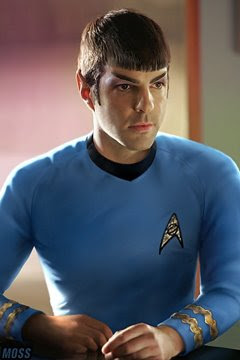 The Spock Monkey (not Zach Quinto) is currently on Etsy and his creator has a couple of other comic/action hero geektastic monkeys available in her store The Sock Drawer. But you may want to hurry over...she doesn't have that many Spock Monkeys in stock. I like that she has kits available with instructions, patterns, and materials. Nice idea. I may have to try my hand at making one of these for my mom, seeing as she is a fan.

Posted byHello Pineapples! on Tuesday, May 26, 2009 0 comments Links to this post

What I did on my spring vacation

A few weeks ago I mentioned that I was set up at the Halifax Crafters sale. It went fairly well - not as well as the Christmas sale, but that is to be expected. I really love being at the Crafters sales as I find all the other artists/artisans to be so inspiring. I need to come up with a better display for the September sale. Not exactly sure what I'll do, but I'll come up with something.

My favourite guy at the sale (and sadly, I only had my camera phone with me) was this dude: His name is Reginald and he wore a tutu. I really need to get better at taking pics of my work. But the tutu was an afterthought, so I didn't think to actually get a photo because I was focused on the sale itself. Anyway, Reginald was the first pair I attempted to sew on my machine. I screwed that up in so many ways, I just couldn't manage to make a monkey out of him. But I still had this body and other appendiges that were so goofy, I couldn't just abandon him. So I played around one day and came up with Reginald. I'm going to keep messing around with other sock/plush creatures and monkey accessories (like tutus). Need to keep things fresh.

Something new I'm trying is embroidering eyes on the monkey and then sewing the buttons on top of that. My reason for doing this is that I prefer monkeys with button eyes, but customers with wee ones like embroidered eyes (for the safety of their own little monkies). So this is what I've come up with:

Right after the fair, I headed off to the Palm Springs area to visit with my parents. My mom and I spent some time working on monkeys. My mom is my source for awesome socks. Check out the collection she has for me:

Those are just some of the 75+ pairs of socks. Her cat Deano was a fan of our craft time: I succumed to a nasty flu on my return, but now that I'm getting better, I'm getting back to thinking about crafts and monkeys. Right now I'm working on one of the red monkeys that the cat is sleeping on. A baby shower is coming up. The red & black monkeys, believe it or not, are a hit with babies. Most people like to buy the more pastel-ish monkies for babies, but the wee ones love the bright contrasting colours. A friend's kid would just stare at hers for ages. And at two months old, that was as much of a sign that she liked the monkey as you could ask for.

Some of the leftover monkeys joined their friends at Love, Me Boutique on Saturday. I still have a few hanging around the house and may look into putting them on etsy in the near future.

Posted byHello Pineapples! on Tuesday, May 26, 2009 0 comments Links to this post

oof. I've been Worst Blogger Ever. well, Worst Craft Blogger. I've been working on fashion blog with a friend for the past month. It's super fun, but no excuse for ignoring this blog. This weekend is the Halifax Crafters Spring Sale. Love these sales. So much creativity and awesomeness under one roof. The North Street Church is bursting at the seams with handmade goodness. Lots of people were out yesterday, despite the crappy weather. I'm hoping for another good day today. Although I'm trying to think of a different display for today. I wasn't feeling yesterday's display.

Speaking of today's sale, I should go get ready and get out the door.

Posted byHello Pineapples! on Sunday, May 03, 2009 2 comments Links to this post