I turned thirty last month and my aunt/godmother sent me this: A huge bag of buttons! Happy Birthday to me!

Here's the story of how these buttons came to be mine:

My aunt is a recently retired elementary school teacher (grade three I believe) in a small town on the east coast of Newfoundland. While talking to my mom one day, the subject of me and buttons came up and my aunt remembered this bag of buttons that had been at the school for as long as she could remember. Not sure if the buttons would still be there, she stopped by the school and lucky for me, they were there.

The buttons had been used over the years as a teaching tool for whatever the teacher could think of that needed buttons. Learning to count is the first thing that comes to mind. Since the buttons had been there so long, no one minded that they went home with my aunt. (at least, I assume no one minded or noticed). Now this big ziploc bag of buttons is all mine! No idea what I'll do with them. Some are fantastic, some have matches, others are just buttons that will come in handy for something someday.

Who knew a bag of old buttons could make a girl so happy?

So far, the buttons have been used to make the eyes of Clem, the sock thing: I'm sure I'll find other uses for them.

I've spent the past week up to my eyes in red felt. I've been working on a project for a plush swap over at the Needle. The theme for the swap was location. I racked my brain for awhile trying to think of something that fit the theme that could translate into plush, but still wouldn't be too cliché. That meant beavers and moose and Mounties were out. Then again, there aren't many beavers or moose in Nova Scotia. I thought of putting a sock monkey in a kilt, but that would have been too easy. What I did come up with was this little guy: 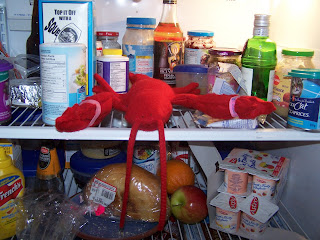 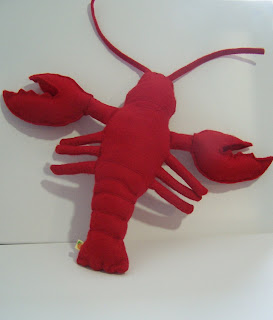 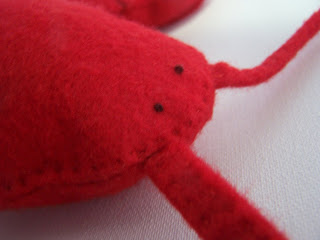 It took awhile...but it was totally worth it. The felt got a little fuzzy from all the work, so I hope my swap person still likes it. He goes in the mail tomorrow.

What also makes it worth all the work was this little guy: 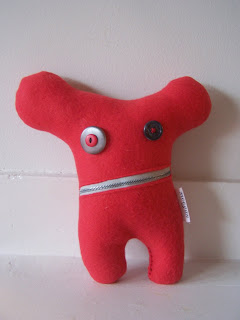 Isn't he fantastic? I named him Bucky, as he's from Ohio and has the colours of the Ohio State Buckeyes. He was made by super talented Megan of Moogan Creations. Check out his mouth! It's a zipper! 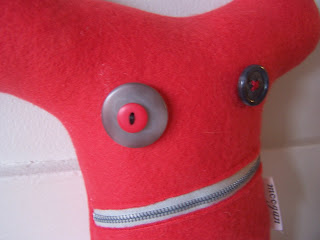 He's fitting in well with the creatures that live on my mantle: 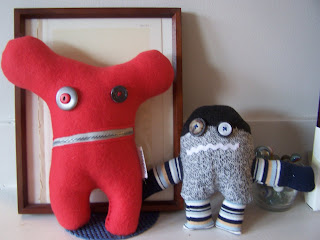 The little guy next to him is Augie Clem, one of my creations. But that's a post for another day...

It's been a pretty lousy day. My hyperthyroid cat seems to be getting a little more ill - but for different reasons. I'm really hoping that it is merely a side effect to the medication. If that is the case, then I'm out $2000 for treatment (we're already out $700). If it is not the medication, then I do not know what will happen next - and quite frankly, I'd rather not think about it.

So, too cheer myself up, I've been trolling blogs for fun free patterns. And with Valentine's barely over (and my teeny hangover still recent history), it is, of course, time to think about Easter. I find the marketing of holiday chocolates to be a pretty ridiculous. Of course, this doesn't stop me from enjoying Cadbury Creme Eggs long before Easter arrives.

The arrival of Easter chocolate also means the arrival of the Peeps. Personally, I am not of fan of Peeps as a treat - I find them odd and sort of scary, like a twinkie, in the way that they are impossible to break down. Have you ever tried to kill a peep? A friend and I did "science fair projects" on them, with often hilarious results. The microwave was our favourite. 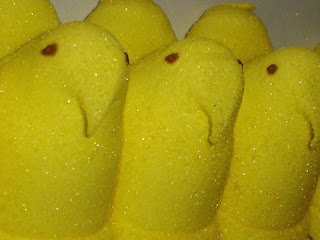 This Easter season, I hope to get crafty with my Peeps. Perhaps enter the Peeps diorama contest. And this is where the free pattern comes in: 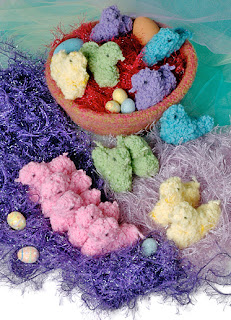 And there is more Peepyness over on Flickr. There's even some crocheted Peeps in there.

I should probably change the subject to "Wee Hours of Saturday Morning Free Patterns", but it really doesn't have the same ring to it.

Anyhow, with V-Day around the corner, the crafty valentines are coming out fast and furious. One of my favourites are the Natalie Dee Valentines at Subversive Cross Stitch. I think Natalie Dee is my hero.

And ScotiaMade of Nova Scotia has some darling, yet feisty Valentines - perfect for those who are not into the saccharine sentiments.

But, as the subject indicated, this is about free patterns and this one from Mochimochi (creator of the ridiculously adorable Tubby) is pretty damn adorable:

Plush and knitting! together! Sensationelle! I've never been a huge fan of V-day, but I think I might whip up a few of those little guys and hand them out to friends.

Okay, it's technically Saturday, but since I haven't been to bed yet I'm going to call it Friday. And I'm going to attempt to share some of my favourite free patterns on Fridays. Hopefully I'll remember to keep track of where I find them. As a student on a very tight budget and a self-taught crafter, I'm a huge fan of the free pattern. I've learned a lot from patterns that talented crafters have shared online. And I appreciate crafters who share their patterns. They really don't get anything out of it, other than some joy in knowing that others are out there are enjoying their designs.

Since I'm a sock monkey junkie, and new to crochet, I thought this is a great one to start with:

Crochet Sock Monkeys by Lisa Thoms of Q.D. Patooties. Pretty fantastic, non? I'm going to add these little guys to my queue of projects to do on Ravelry.